Here's a spread with a lot of history; it's even been the subject of several books. In 1824 Don Pablo Montoya, a former captain in the Spanish army with excellent political connections, petitioned the Mexican government for a grant of land. In the remarkably short period of 12 days, the authorities gave him the first of what would be two land grants totaling a gigantic 800,000-plus acres in eastern New Mexico northwest of present-day Tucumcari. The Bell Ranch--named for a similarly shaped and named mountain in the middle of the ranch--has been a working cattle spread for more than 170 years. The Conchas Lake Dam covers a portion of the old ranch with waters from the Canadian River.

Over the decades it was the usual New Mexico story -- good years and bad times, financial bounty and economic distress. By 1867 the Montoya ownership was completely extinguished: Montoya's lawyer had taken it over! The ranch went through several reorganizations and in 1947 was divided up into six large parcels and sold to the highest bidder.

In 1970 ownership of the largest-single chunk--so large it has its own Zip Code, 88441--was acquired by William N. Lane II of Chicago, chairman and CEO of publicly traded General Binding Corp., a maker of office supplies and equipment. Further purchases have fleshed out the holding to its present size. Lane himself died in a 1978 car accident on the ranch.

The ranch is now (1997) owned by a trust for Bill Lane's five children. A non-family member manages the ranch, although one son, Jeff, raises his family on the Bell. ``You can't beat the lifestyle,'' he says.

CONCHAS LAKE - In 1990 the South Area of Conchas Lake State Park was rundown. The Lodge alone needed an estimated $200,000 in repairs. The overdue work was not being done or even scheduled. The state Park Division had to close the area's marina, store and lodge. Today, South Area's alive and well. "I used to dread inspecting when state parks had everything," said Bill Spurgeon, project manager for the Army Corps of Engineers at Conchas Dam. "I knew it would be bad. Now you don't find significant discrepancies." South Area's rebirth is mostly due to South Conchas Lodge & Resort, the private firm that now manages the facilities. The private operators of the South Area still have problems but believe their operation is on the move. Arthur Walker and Ken Wright recently adopted the name "South Conchas Lodge & Resort" for their operation. They also own the Rio Grande Cantina Bar and Grill in Albuquerque. "Everything is on the move here," says Wright Among the improvements he and lodge manager Ralph Gonzales pointed out are: The Lodge opened Memorial Day 1991 with seven rooms available. Now the lodge has 28 rooms open and 12 more targeted for mid-July. The marina had trouble weathering storms and has been modified so it's not as rigid as before. The golf course has a regular maintenance program, and this fall extensive fertilizing of the fairways (Spurgeon said greens are in pretty good shape) is planned. In the future there will be more campsites maybe as many as 30 west of the lodge at the original Cannon Air Force Base recreation area site. That's the only area in the concession with sandy beaches. "We're very proud of our food," said Wright. "Our Saturday night prime rib has really taken off. The Lodge at Conchas Lake is open for business after a switch from public to private management. Golf course greens fee for nine holes is $4 on weekdays, $6 on weekends. Like the camping fees, visitors are likely to find they pay on an honor system, making out their own receipts. ' For more information on the South Area, contact South Conchas Lodge & Resort. 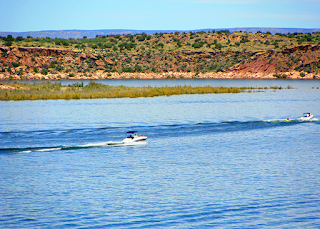